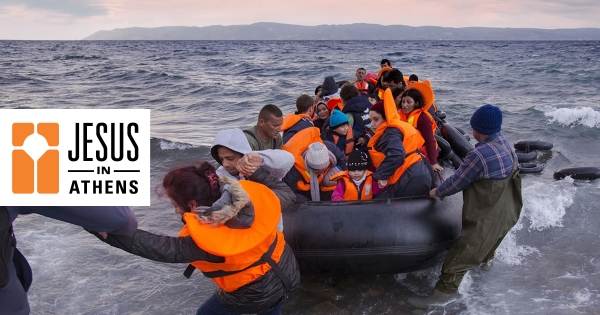 There is an amazing documentary about the migration of over one million people from war-torn areas in the Middle East to Greece on their way to other parts of Europe. The stories told unfolded during our lifetime and are still unfolding, although world attention has waned. The film is called, “Jesus in Athens,” produced by The Gospel Coalition in 2019. I pray that all believers in Christ watch it. It’s a powerful film with a strong, contemporary message from God through Christ. It gently but firmly shattered my despair over world events and softened my heart, for which I am extremely grateful.

You see, rather than focusing on the very real, negative effects of Muslim immigration into the West, the film focuses Christian attention on a beam of divine light that is Christ at work among them. It reminds us to trust God in all things.

As it has always been, we are a world of migrating peoples. Nothing will ever change that, no matter how many walls we build, how often we look away, or the many laws we pass against it. You see, in a spiritual sense, we are all refugees traveling through this world on our way to the next. If we apply that perspective to world events, it will serve us well.

By God’s grace, “Jesus in Athens” strengthened my faith that God remains very active in our world, and that Christ has never stopped loving, living, and walking among us.  The film strengthened my faith. It shows how God continues to take bad situations and turns them into something hopeful and good.

In a way, the stories in the film resemble our earliest Bible stories: Stories of early Christians migrating throughout the Roman Empire over 2,000 years ago — fleeing persecution, hatred, and often certain death.  Stories of bad situations that God used to shape our faith and to do something hopeful and good.

In contrast to the film, today’s media stories covering migrating Muslims exploit our fears, hate, selfishness, and greed. They are stories of hopelessness and despair. Yet, while people write stories about how the West is being hopelessly overrun with Muslims fleeing persecution and lament the challenges refugees bring with them, God is writing another story. A bigger one. God’s story is reflected in this film. It is a contemporary love story between God and all His creations, and a living Son of God who continues to walk among us, loving and serving all who need Him. It is a story of hope and inspiration.

“Jesus in Athens” focuses on the transformation that can occur when Christians extend to Muslim refugees unexpected acts of love, hospitality, charity, kindness and selflessness. It is a reveal of contemporary leadership in Christ: One where we are asked simply to “Follow Him.” (Matthew 16:24)

The film reminds us to look past our fear and hatred and follow Christ’s example as first set before our time. It asks that we look at the “refugee situation” through the eyes of Christ — not through human ones from which we cannot see. “Jesus in Athens” is not a story of hatred, fear, hopeless and despair, but of Christ living and working among the downtrodden to bring to all who seek God love, security, hope, and trust. It’s a story that can be heard only by those who are willing to trust in God and do the right thing in the shadow of overwhelming darkness.

Spoiler Alert: One of my favorite testimonies in the film is a true, contemporary story about a small Muslim girl fleeing with her parents from the ravages of war. They were in a crowded, unseaworthy boat when a terrible storm descended upon them at night. The little girl fell from the battered boat into the stormy sea. Her parents frantically tried to rescue her, but it was impossible to hear her screams above the wind or to locate her in the angry waves that threatened to drown them all. Their little girl could not swim, nor could her parents. As the parents prayed to God that He would save their drowning child, the little girl reappeared, soaking wet, in the boat across from where she had fallen in. The Muslim child told her parents in a calm voice that after falling overboard, a man “in shining white” walked towards her across the water. She said “the man in white” gently lifted her from the sea, carried her as He walked above the waves, and placed her back safely in the boat. No one in the storm-battered boat could make any sense of it.

When the little family safely reached the Greek shoreline, they were frightened and in total despair. They recalled being “moved” to walk towards the light of a distant fire. When they finally reached the source of the light, they discovered there a Christian missionary who had built a fire on the beach to warm himself — and any refugees who had survived the storm. While the little family warmed themselves by the fire, the missionary asked if he could read them a Bible story. The missionary said he was “moved” to read them a particular story that he had never read to refugees before: The story about Christ walking on water to a sinking boat from which His disciples had similarly cried to God for help. When the missionary finished reading, the parents of the little girl were crying. The little girl was smiling. When he asked why, they told the stunned missionary the story of how that same “man in white” had saved their daughter that very night. Before parting and continuing on their journey, they asked only if they could keep the Bible. They explained they wanted to learn and share all they could about “the man in white” who had saved their little girl. They were given the Bible, and the missionary never saw them again.

Whether we personally witness or recognize the Hand of God in contemporary challenges doesn’t change the fact that miracles are happening all around us.

“God has given each of you some special abilities; be sure to use them to help each other, passing on to others God’s many kinds of blessings. Are you called to preach? Then preach as though God himself were speaking through you. Are you called to help others? Do it with all the strength and energy that God supplies so that God will be glorified through Jesus Christ – to him be glory and power for ever and ever. Amen.” 1 Peter 4: 10

I sometimes wonder whatever happened to that little girl and her family. I know only that I recognize “the man in white” from stories in the Bible. And in knowing their story too, that my faith has been affected deeply in many ways.