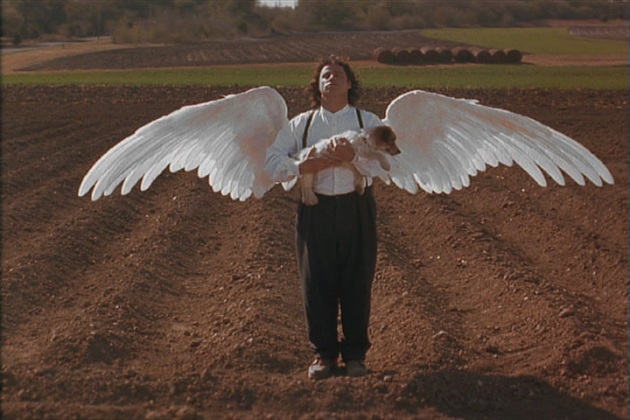 It doesn’t have to be complicated. Sometimes studying the Bible in-depth feels as though I am drowning in questions and information overload, and I need to temporarily stop, tread water awhile — and breathe.

And that’s all right. Sometimes I just need a moment to collect my thoughts – and sometimes, I need many. Admittedly, the balance between my faith and my understanding of God has ebbs and flows, like the tide outside my window.

Sometimes I need to stop reading what others have written about God so I can focus more on my own perceptions – and experience God and Jesus in my own way.

Last night I began watching a documentary about “miracles” in the modern world, in part because I have been missing Dad since he died and thinking about miracles reminds me of him. Dad believed God’s love, mercy, and forgiveness were themselves miracles. Miracles we experience every day.

The documentary I watched focused on the role of angels in modern miracles, focusing my attention from the physical world to the bridge between it and the spiritual world.  The people in the film who had experienced miracles could not explain them but were forever changed by them. Many credited angels for protecting them, who they believe may have intervened in their lives for the purpose of protecting or helping them. And maybe that’s true.

I started believing in angels when my daughter was a young child. She would often stare out the car window from her car-seat while I was driving. One particular, starless and moonless night something happened that I’ll never forget. The night was arctic-like, with life-threatening wind chills, and the isolated, country road we traveled concealed slick, black ice. I was having difficulty keeping the car on the road and away from the embankment. I kept glancing at my daughter in the rear-view mirror to insure she was alright. Suddenly, I saw my daughter’s face transformed by a spontaneous, heartwarming smile as she peered out the window into total darkness – the type of smile she reserved for her mommy or daddy. She stretched towards the window and waved at the “pretty people with sparkles and wings” who she saw smiling back at her — alongside the car — preventing our car from going over the embankment. Unlike my child, I saw no angels, only darkness. But I felt their presence: A feeling of love, safety, and tenderness, the intensity of which is indescribable.

Angels do exist. The Bible describes angels as spiritual beings who have much greater power and abilities than humans. (2 Peter 2:11) Angels guard and protect us, in accordance with God’s will and perhaps in answer to our prayers to Him. (Psalm 34: 7, Psalm 91:11) The Bible teaches that when heavenly angels guard and protect us, they do so consistent with God’s will. Like us, angels are God’s creation. Like believers in God the Father, Jesus and the Holy Spirit, heavenly angels serve Him.

It would be tempting to worship and glorify angels, but they don’t want that. The Bible specifically cautions that angels should not be glorified nor worshipped —only God: “I, John, saw and heard all these things, and fell down to worship the angel who showed them to me; but again he (the angel) said, ‘No, don’t do anything like that. I, too, am a servant of Jesus as you are, and as your brothers the prophets are, as well as all those who heed the truth stated in this book. Worship God alone.” Revelation 22:8-9 (Parentheses added.)

Nor should we pray directly to angels or otherwise “bypass” God. God is listening to our prayers, He knows what we need, and it is by God’s love and grace that our prayers are answered. Even Jesus alluded to His disciples that appeals for angelic help must be made to God, not directly to the angels: “Don’t you realize I could ask my Father for thousands of angels to protect us, and he would send them instantly?”Matthew 26:53

Angels exist in another world, the spiritual world, of which we do not belong. If and when we interact with angels, it is God to Whom we owe our thanks. Heavenly angels reflect the love of God, they follow His commands to care for us and protect us, and they are not to be feared by God’s children. “In scripture whenever angels appeared there was always one main thing that is mentioned: ‘to fear not’”(quote by Sahne Callahan, “Joy Through Presence”).

Of course, “…the problem for people today is not simply believing that angels exist, but being able to distinguish between angels and demons…” (quote by Billy Graham, “Angels: Ringing Assurance that We Are Not Alone”). In order to distinguish between angels and demons, we should develop a personal relationship with Jesus that is based in faith, prayer, and knowledge of Scripture. Satan and Satan’s servants are able to masquerade as angels, but they can be exposed by their incompatibility to Scripture:“ …Satan can change himself into an angel of light, so it is no wonder his servants can do it too, and seem like godly ministers. In the end they will get every bit of punishment their wicked deeds deserve.” 2 Corinthians 11:14-15 The possibility of deception is another reason that we should never worship angels, pray to angels, or insert angels in between ourselves and God — between ourselves and Christ.

Still, followers of Christ can take comfort in knowing that neither angels nor spiritual beings pretending to be angels can separate us from God’s love. “For I am convinced that nothing can separate us from his love. Death can’t, and life can’t. The angels won’t, and all the powers of hell itself cannot keep God’s love away. Our fears for today, our worries about tomorrow, or where we are — high above the sky, or in the deepest ocean — nothing will ever be able to separate us from the love of God demonstrated by our Lord Jesus Christ when he died for us.” Romans 8:38-39

Image from the 1996 film “Michael”, starring John Travolta. Author has no connection to film, other than a fan. Image may be subject to copyright.

10 thoughts on “Angels In Our Midst”